Extremely knowledgeable on a subject that is near and dear to my heart: Self-Directed IRAs. 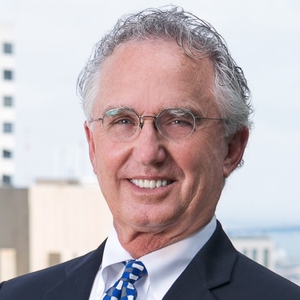 Miller, Monson, Peshel, Polacek & Hoshaw (1974 – Present)
In 1974, Tom was hired as a law student at the Firm to temporarily fill in for an ill law clerk. Tom has been with the firm ever since. After finishing law school, Tom was hired by the firm as an attorney. Tom’s practice developed primarily in the field of ERISA law, which was passed in 1974. Tom, along with his partner Susan Horner, has handled numerous ERISA litigation cases, many of which are published. His practice has since grown to include trust, probate, and estate litigation as well as general civil litigation.

Mr. Monson has also served on the Ronald McDonald House Golf Charity Committee, the Boys and Girls Club of Greater San Diego Golf Tournament Committee, and the Palomar College President’s Golf Tournament Committee. Mr. Monson was Chairman of the Spectator and Information Committee during the 2008 USGA US Open at Torrey Pines, for which Mr. Monson worked every day from 4:30 a.m. to 10:30 p.m. for 8 days, which Mr. Monson says was worth it because it ended up being one of the greatest US Opens ever and put San Diego in the world-wide spotlight as a place to be.